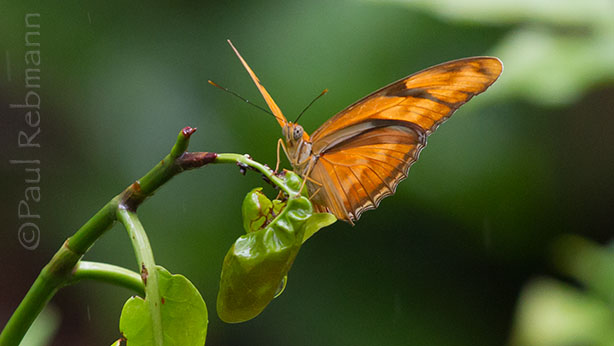 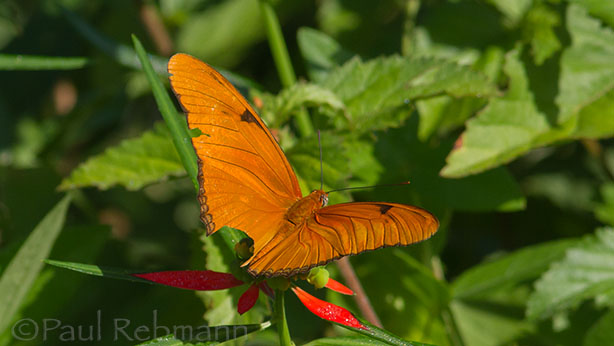 Julia butterflies are found in south Florida mostly along the edges of hammocks and in shady disturbed areas. This species also occurs in Texas, with strays up the Mississippi Valley, Mexico, Central and South America into Brazil, plus the West Indies.
Dryas iulia butterflies are mostly bight orange with a few distinctive black markings. Males have two black spots on the upperside of the forewings, slightly more than midway towards the tip. Females have a solid black band in the same place, plus another blcak band closer to the trailing edge of the forewing. Both sexes have thin black markings along the wing margins, slightly more in females. Females are a duller orange on top and light brown on the undersides, with dark areas where the black bands are on the upperside. Wingspans range from 8.2-9.2cm (3-1/4 to 3-5/8 in.).
Larval host plants are vines in the passion-flower family (Passifloraceae), particularly corkystem passionflower(Passiflora suberosa) and white-flowered passionvine(Passiflora multiflora). Popular nectar plants include lantana(Lantana species) and Spanish needles(Bidens alba).
The Florida population is considered the subspecies largo. In 1975 this subspecies was described and another 12 listed in the Journal of the Lepidopterist's Society by Harry K. Clench of the Carnegie Museum of Natural History.

Dryas iulia is a member of the Nymphalidae - Brush-footed butterflies family.

For more information on this species, visit the following link:
Butterflies and Moths of North America page for this species