At 3:31 am on Sunday August 12, the Parker Solar Probe was launched on a Delta Heavy rocket. I captured the launch from Ormond by the Sea with a long exposure photograph of just over five and a half minutes. The lighted buildings are in Daytona Beach and the bright light between them and the rocket trail is the Ponce Inlet light house. The two lights below the arc were fishing vessels, one(the line) moving more perpendicular to my line of sight, the other(the big dot) more directly approaching or receding from my viewpoint. One star in this field of view was bright enough to leave a star trail. I think it was Vela.
After the launch, I stayed up experimenting with photographing the Perseids meter shower. One of those meteor images can be seen here.
At 4:21 am a bright flame passed overhead in the sky. As I was set up for capturing meteors, I managed to take eight 2-second long exposures that showed this flaming object. At first I thought that this object was the third stage burn for the Parker solar probe, but that actually occurred about 11 minutes earlier. Since both the second and third stages left earth orbit, it also does not appear to be one of the spent rockets de-obiting. The only other thing I can think it could be was a very long lasting slow meteor fireball. Click on the thumbnail to see the stacked composite image made from these 8 photos or the video below showing the timeline of the images. 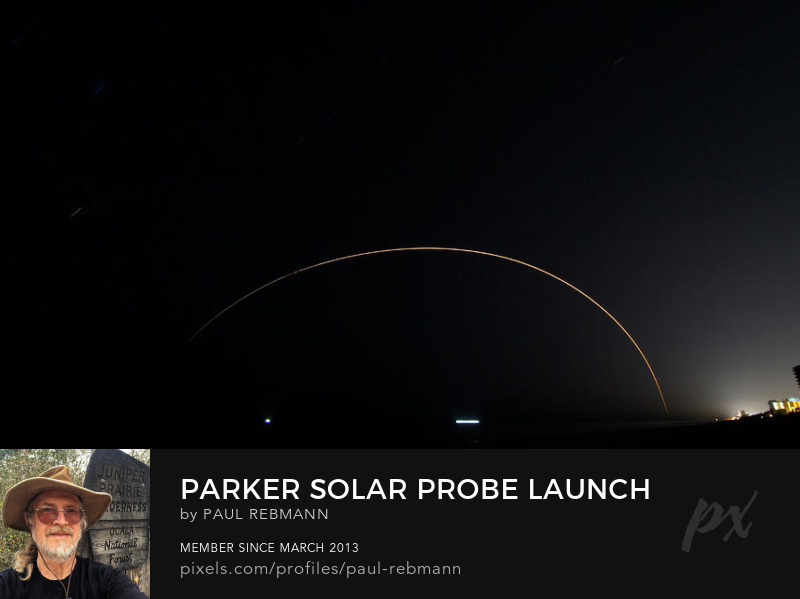